During the warmer months of the year, it’s a common sight to see various insects flying around. Bugs are just something that we all have to deal with. But the truth is that some insects are far more annoying than others.

One of the worst insects in many people’s opinions is without a doubt, wasps. But they have a tendency to get everywhere during the spring and summer, sometimes they might even go so far as to make a nest in your porch. Or at the very least, fly around your porch a lot.

So today we’re going to be exploring some ways that you can keep these unwanted visitors away from your porch so that you can enjoy the warmer seasons without worrying about wasps ruining your time outdoors.

How To Keep Wasps Away From Your Porch

There are several ways to go about keeping wasps away from your porch. Depending on how active your wasp problem is, you may even need to combine one or more of these solutions. And in the worst case, you may need professional help.

We’re going to get into some of the ways you can repel wasps soon, but first, let’s take a look at a quick summary of the tips we’ll be giving today.

Use Technology To Repel Wasps

In recent years, manufacturers have started producing ultrasonic pest repellers that are supposed to emit a sound that humans can’t hear but that will repel certain bugs. They’re even supposed to repel rodents, like mice, as well. Just be sure you don’t place it in an area where the sounds will drive the wasps indoors instead!

Note: These ultrasonic noises can disturb pets, so be careful where you place them if you own pets.

There is some controversy as to whether or not these devices actually work. There are a lot of success stories and many people swear by them. But there are also people who said that the insects or rodents returned after a while when they realized the noise was only annoying and posed no real danger.

At the end of the day, you can choose to try it or you can go with one of the other tips on this list.

There are many smells that wasps find repulsive, and these will effectively keep them away from the area. An added bonus is that a lot of different insects also hate these smells, so you could be repelling other annoying bugs at the same time!

Some of these smells are…

You’ll notice that many of these smells come from plants. If you decide to use one of them then you could actually grow the plant, or you could diffuse their oils on your porch instead. Diffusing citronella oil is one of the most popular ways to deter wasps from an area.

But since these plants look nice and aren’t hard to take care of, they’re something that you could easily place on and around your porch if you don’t want to bother with diffusing oils.

As far as dryer sheets go, you can place them around your porch and it will effectively get rid of wasps as well. Dryer sheets are also known to deter insects like bees, beetles, mites, and more!

Don’t Give Wasps A Reason To Come To Your Porch

By far though, one of the best ways to keep wasps away from your porch is by not giving them a reason to come there in the first place. There are many things that might attract the wasps to the area such as…

Any source of “food”. This could include human food, exposed trash, or spilled drinks. One of the most common culprits is pet food and pet dishes being left on the porch.

Doing these things should deter wasps from your porch area because they have nothing to gain from being there.

You May Need Professional Help

If the problems with wasps persist or if they’ve built a nest in your porch, then you may need to contact an exterminator.

This is because wasps can be dangerous, especially if they’re protecting a nest. And you don’t have access to the same tools, protection, and expertise as professional exterminators do. So it’s better to be safe than sorry if the wasp situation is out of control.

A wasp problem is definitely something you need to take seriously, even if it’s a small annoyance at first. A stray wasp here and there isn’t unheard of, but if you notice a lot of them gathering around your porch then it’s time to do something about it.

And a little bit of prevention is never a bad thing, so if you’d like to use some of these tips before you even notice a problem then that’s a good idea!

But if the tips don’t work, and especially if the wasps begin nesting, then we can’t stress enough that you should seek professional help.

By Andrea Rodríguez
I'm Andrea, a decor and interior design expert who loves to share her tips and tricks for creating a beautiful home. I believe everyone deserves to live in a space that makes them happy, and love helping others achieve that. I'm always on the lookout for new trends and ideas to share with her readers. Can’t wait to help you create your dream home!
Previous Article How To Secure the Bottom of a Chain Link on Your Fence
Next Article Easy Ways To Remove Hair Dye From Countertop
Leave a comment 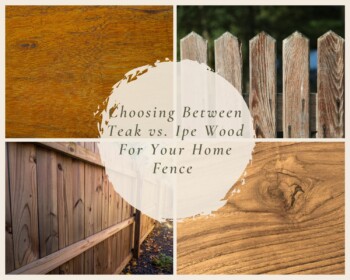